Dual-energy (DE) radiography is a technique that can remove specific anatomical noise from a radiograph and generate tissue-subtracted images. Typically, a trio of images is presented comprised of a standard digital radiography (DR) image, a soft-tissue image where the bone tissue has been removed, and a bone image where the soft tissue is not present. Dual energy X-ray images have been demonstrated clinically over 20 years to provide significantly better detection of cardiothoracic diseases including pneumonia, pneumothorax, lung nodules, coronary calcium, and tuberculosis compared to traditional digital or analog X-ray but adoption has been slow. This is because current dual-energy technology uses two sequential, spectrally different X-ray exposures that cause motion artifact streaks in the image and also require a proprietary, premium X-ray system that uses a special fast switching X-ray source.

In this talk, we will describe the ideation and development process of a next generation dual energy X-ray technology with particular focus on the commercialization steps of the world's first portable, single exposure, dual-energy X-ray detector called Reveal 35C. Reveal 35C obtains both standard X-ray and supplementary dual energy images simultaneously using a single X-ray exposure with best-in-class dose efficiency and zero motion artifact. Reveal 35C is cleared for use in the USA, Canada, Australia and parts of Asia and South America and is currently being used in three continents because it is backward compatible with existing X-ray systems (CR, DR, fixed, mobile). Reveal enables an instant improvement in clinical outcomes for the entire 500,000 global X-ray install base via a simple X-ray detector swap. Like color photographic film replaced black and white film, Reveal is initiating a global transition from black and white X-ray to dual energy or color X-ray to usher in a new era of higher accuracy, point-of-care X-ray diagnostics for better patient outcomes and more effective healthcare. 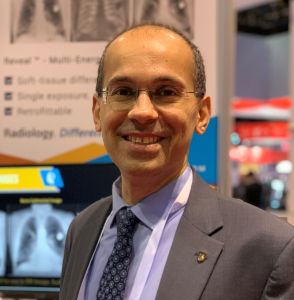 Dr. Karim S Karim (PhD, PEng, MBA) is the Executive Director of the Center for Bioengineering and Biotechnology and a Professor in Engineering at the University of Waterloo. He has raised more than $15M in research grant funding, trained over 40 PhD and MASc students, has co-authored 250+ publications and 50+ patents. He is also a founder and Chief Technology Officer of KA Imaging, a University of Waterloo spinoff that makes innovative X-ray detectors and systems for medical, veterinary, scientific and industrial markets. Karim has developed novel X-ray imaging devices and systems since 1998 and has both supported and founded multiple startups in the past two decades. One of his “color” X-ray innovations is now starting to replace black and white medical X-ray globally while another is used in ultrasonic fingerprint sensors in mobile phones and tablets.

©2020 The Canadian Organization of Medical Physicists. All Rights Reserved
Made with by